STORY FROM OUR FOUNDER

“It’s funny; I get this question asked quite often… ‘How did you decide to start a computer company?’ I was 12 years old, personal computers looked like bulky VCR players with a black built-in screen and a green cursor. Not certain who visited what website, but our family’s computer got its first virus. Trying to be super hero, I attempted to fix it. Booting to a floppy disk, I was given the option to Format C:\. Choosing No, nothing happened.  So I try again, this time choosing Yes, figuring formatting something was a good thing like organizing a document. Minutes later, the computer had been wiped clean. My mother’s documents from work were now gone forever.

Mom opens the phone book, calls Fast Tech (note: not related to our current firm name) to fix our computer. Hours later he got the computer up and running again, but without data. I was amazed he could do that and wanted to learn myself. From age 12 to 18 I self taught spending every hour I could breaking/fixing/building. At El Camino High School I enrolled in the Eagle Polytechnic Institute – every class I took… Math, Science, Drafting, English… was all done via computer. 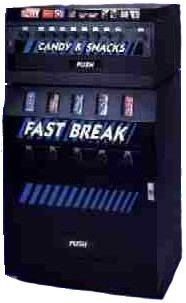 Feeling like an entrepreneur, I started a vending machine business in high school, Fast Break Snacks. Using monies earned from my year at McDonalds, I bought three vending machines and placed them in senior centers and local service centers. The front of the machines came with the label “Fast Break”. This was the birth of our name.

After a year of children stealing candy from my machines and constantly refunding 50 cents, I gave the vending machines away. In 1999, Sevant.com opened their doors providing residential on-site computer support in the Fair Oaks/Sacramento area. I was one of the first and last employees of the firm. A year later the company folded, paid back its investors, and I licensed to operate as Fast Break TECH. From 2000 to 2005 I worked solo, incorporated in 2005, hiring my first employee. From then on we’ve been expanding leaps and bounds, 2000+ clients and growing. We thank you all for your loyal support and look forward to being your IT consultants for life.”

Stop Costly Downtime
Am I Operating My Technology To Its Fullest?

SOME OF OUR HAPPY CLIENTS

Fast Break Tech has been a huge asset in meeting our phone system needs around the office. Their reliability, quick response time, and know-how made setting up a new phone system in a new office so much easier. We are so glad we made the switch to Fast Break!

Thanks again for both recommending the system and for your excellent follow through in answering our questions – we value our business partnership with you and would unreservedly recommend you.

After consultation, Fast Break Tech installed a Cisco phone system with a button for each client. They rolled in the existing phone numbers from each carrier, including a specialized toll-free number, so those individual bills went away and all is managed now on one phone with one account.

We investigate the origin and cause of fires… real fires. On the flip side, Fast Break Tech protects and prevents us from technology fires. Since 2012 Steven and his team re-built our entire infrastructure with new computers, new server, faster network, and in June 2016 VoIP phone service. It made financial sense to close our physical office space and go virtual.

As a small non-profit, we were seeking a reasonably priced solution for our phones that would allow us to grow. FBT recommended a VoIP system. In the spirit of full disclosure, there were a few hiccups as we got started, mostly related to internet service issues. Fortunately, FBT was there to make sure those were all ironed out, and we’ve been happy since.

The success of our 30-year-old communications firm hinges on our ability to communicate clearly and effectively with our clients and key audiences. My staff and I have benefited from VoIP phones in multiple locations and have been pleased with the speed and quality of the service provided to us by FastBreakTech. I would highly recommend to other organizations, large and small, that may be considering a VoIP system.